SUMMARY – Sophie Derkzen is a journalist and moderator with a fascination for international politics and culture. She hosts Foreign Desk (VPRO Bureau Buitenland), the daily foreign affairs program at the Dutch national NPO Radio 1. Previously, she worked as a political reporter for Vrij Nederland, as guest editor for Die Zeit and as policy officer at the Political Department of the Dutch Embassy in Berlin. 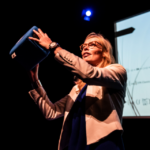 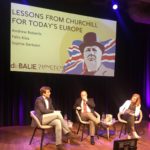 Sophie Derkzen is an Amsterdam-based journalist and moderator who spent various phases of her life in Germany and has expertise in international politics.

She started her career in Amsterdam as a journalist focusing on domestic politics and socio-economic issues. From 2009 until 2014 she worked as a staff reporter for the Dutch opinion magazine Vrij Nederland.

Due to an ongoing fascination for German politics and media, in 2015 she decided to exchange her position as reporter for a new role of policy officer at the political department at the Dutch Embassy in Berlin. She covered German internal politics and gained profound knowledge of politics in the EU.

In 2018 she returned to Amsterdam, writing about Germany for The Correspondent and making a podcast about Angela Merkel.

From March 2020, she hosts Foreign Desk (VPRO Bureau Buitenland), the daily foreign affairs program at the Dutch national NPO Radio 1. Next to her radio work, she regularly moderates public discussions and live interviews, preferably focusing on international politics and culture.

As a writing editor with a background in history and theatre, she is fascinated by storytelling and the power of words.

In addition to Dutch, her mother tongue, Sophie is fluent in English, German and French.

That said, she is always on the lookout for opportunities to use her international expertise and keep Dutch-German relations at the core of her activities.

For more information, please send an email to info@sophiederkzen.nl